The world is running so fast. Similarly, it is changing so fast too. To survive and to make things better innovation is a need. To innovate or to invent one should have an innovative mind and guts to start a process of making a thing that does not exist even. Keeping all these things in mind, people start searching for something new but forget that whenever you do something new, there is a hindrance to it. Failure prevents that work from happening. Let’s see what Elon Musk, the world’s greatest innovator, has to mean about Failure.

How failing is important: Elon Musk Elon Musk was born on June 28th, 1971 in South Africa. At the age of 10 Musk developed an interest in computers. Musk created a game called Blaster and at the age of 12, he sold it to a magazine for 500USD. Knowing these things, you must have understood how different Elon Musk’s childhood is from that of another child. Which kind of programming was done for a person like Elon Musk?

He learned how to defend himself with karate and wrestling. When Musk was growing up, her mother worked five jobs at one point to support her family. Musk’s father, Errol Musk, was a wealthy South African engineer. He studied Physics and Economics at the University of Pennsylvania, USA.

With 28,000 USD of his father’s money, Musk and his brother Kimbal started Zip2, which is a Web startup that provided city travel guides to newspapers. Later, in 1999, they sold Zip2 to Compaq computers for 307 million USD, earning Musk 22 million USD. He invested more than half of his earnings to cofound X.com an online banking service. The company quickly merged with its rival and became PayPal with Musk as the majority shareholder. In 2002, eBay bought PayPal and Musk walked away with 180 million USD.

Every time Elon Musk innovate and made himself better and richer. All these businesses were a path maker and lighthouse for his innovative mind. In 2001, Musk conceptualized a project to land a miniature experimental greenhouse on Mars. Russians offered to sell one rocket at 8 million USD. Musk felt it was artificially overpriced. They taunted Elon Musk they said, “Oh little, boy you don’t have the money?”. Musk I think “We can build it”, then stormed out of the meeting. On the flight back from Moscow, Musk realized that they could start a company. That could build affordable rockets he needed. Musk calculated that the raw material for building a rocket was only 3 percent of the sales price of a rocket at that time. SpaceX could cut launch price by a factor of ten and still enjoy a 70 percent gross margin. With 100 million USD Musk founded SpaceX, in May 2002. with the intention of the building of building spacecraft for commercial space travel.

In 2006 the first SpaceX rocket failed in just 33 seconds after lift-off. In 2007 and 2008 the 2nd and the 3rd chance to establish Company’s credibility also failed. 3rd failure almost killed the company. Musk had money that could only fund the 4th launch. The situation was so weak that the path in front of Musk was all dark. There was no light there, except his brain full of the drill, become a source of light.

On 28th September 2008. The 4th Falcon 1 Rocket was successfully launched and achieved Earth orbit. History was made. Falcon 1 became the first privately developed liquid-fuel rocket to orbit the Earth. On December 23, 2008, NASA awarded SpaceX 1.6 billion USD contract to handle cargo transport for the International Space Station. In 2011 SpaceX publicly announced a Reusable launch system development program. After a few failed attempts. SpaceX achieved a successful landing and recovery of the first stages in December 2015. Musk believes a fully and rapidly reusable rocket is needed to reduce the cost of Space Travel.

Why Failing is Important: Elon Musk 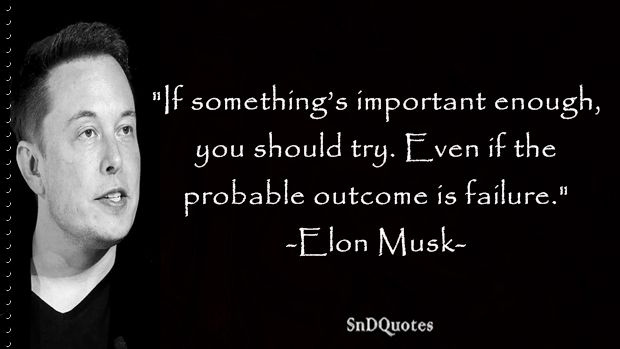 After a huge failure and spate of dreams, anyone else probably can’t survive. Even, when it was his last gamble. If he failed in this too, nothing would remain in his hands. But by that time, he had understood his ability, he had understood what was the things that were making him a failure. And by this failure, he had learned what would be the thing, that will make him successful.  Why failing is important: Elon Musk was clearing a little bit. But did it succeed or not? We all know. It was the success that was telling them the secret to becoming successful. Perhaps that is why they say that it is important to know the failure to get success.

Failure and opportunity, Synonym or antonym?

We know what are synonyms and antonyms. A synonym is the other name of the thing or similar or alternative word of the thing. While an antonym is the opposite of the word. So, how failure and opportunity are connected? At a once most people legally reply opportunity is an antonym of failure. But on thinking carefully you will realize that the opportunity is the alternative of failure. When a person failed he got another opportunity to try once again to complete the task. In this way, we can say whenever a person is failed he got an opportunity of completing the failed work. Thus opportunity got is proportional to the failure arrived. And thus, failure is a very essential and integral part of success. That’s why we heard “how failing is important: Elon Musk”

The failure has enormous power that the big schools and universities cannot teach, it teaches a failure. Failure is the first step to success. There is so much strength in failure that anyone who fails learns with it but he also learns who sees the failure of another person.

Ok failure this, failure is that. blah blah. But how failure can be so useful? How to use failure to achieve success?

One most important thing regarding failure is that it will help you when you will learn something with it. The time of success achieved is lesser if you learn better. More you learn with the failure and take the promise that you will not repeat the mistakes, faster you will obtain success. The main roles of failure are, as such

Learning from failures is important but implantation is also very important.

Whenever someone’s plan fails, so he or she needs to make another plan, say plan B. If plan B failed you will need to make another plan, say plan C and so on. Sometimes this number moved to 1000 like in the case of Thomas Elva Edison. Thus the specialty of failure is that it develops the ability of plan-making and planning. As it allows you every time to do more practice. It behaves like a chain reaction, one trigger the other.

The person who fails has such a structure in his mind that he does not stop from any situation, no matter how many paths are closed, he finds a new way and if all the paths are closed then he makes his own way. It has the power to make skills which were not present in you before. Failure is like learning the bicycle. If you once learned the bicycle you will remember it almost always. Similarly, once you learned the pressure handling you will learn it always.

Failure will help you if you learn something with it and also know the implication of it. Failure is the first step to success. So don’t be sad if you failed.

ALSO READ:How to Deal with Aggression and related issues

10 Demanding Skills In 2020 And Where To Learn Them Free

How To Make A Poker Face Anywhere

How To Stay Calm In Any Situation: MENTAL NOTES

How Pseudo Feminism is Disgrace to the Society